VWOnlineLuxury is an Internet e-commerce S2b2c company, the world’s first online shopping and media platform that specializes in high-end art music, vogue, health & wellness. V is very valuable, W is spiritual wealth and LUXURY is a life attitude, beauty and intelligence, she has a strong natural miracle creation ability. VW is a dream maker, with an enthusiasm for strong artistic personality, expresses a truly contemporary aesthetic, realize classical music artist implementing new ideas to create value. Our mission is to provide high-end enterprises, merchants and customers with a greater diversification of high quality, high artistic, cultural and personalized platform, provide high-end sales channels, extravagance e-shopping experience and sharing the most updated, trendy and full of savor information at the same time. If you like online shopping and would like to have a great starting point for hunting your beloved products and special have a look at VWOnlineLuxury.com. Online store at your fingertips! Happy Shopping!
Categories
Recent Posts
Meta

Posted by VW in Upcoming Events on Friday November 23rd, 2018

Organizers:
• Youth Sinology Education Base
It is composed by CHINA Against Corruption Law Association, China cares for the next generation working committee Education Centre and University of International Business and Economics.

• CHINA Against Corruption Law Association, CACLA
It is composed of Central Discipline Commission, Central Political and Legal Affairs Commission, Supreme People’s Court, Supreme People’s Procuratorate, Ministry of Supervision and other units and many experts. It is an important institution specializing in the study of the legal system of clean government, legal publicity and education, and the construction of a clean government culture.

• China Cares for the Next Generation Working Committee
The educational center is authoritative institutions specializing in extracurricular education for teenagers and strengthening the ideological and moral construction of minors. They have made remarkable achievements in caring for the comprehensive development and growth of teenagers.

• University of International Business and Economics
A multi-disciplinary and national key university with economics, management, law, literature and science as its core academic areas of expertise directly under the Ministry of Education. 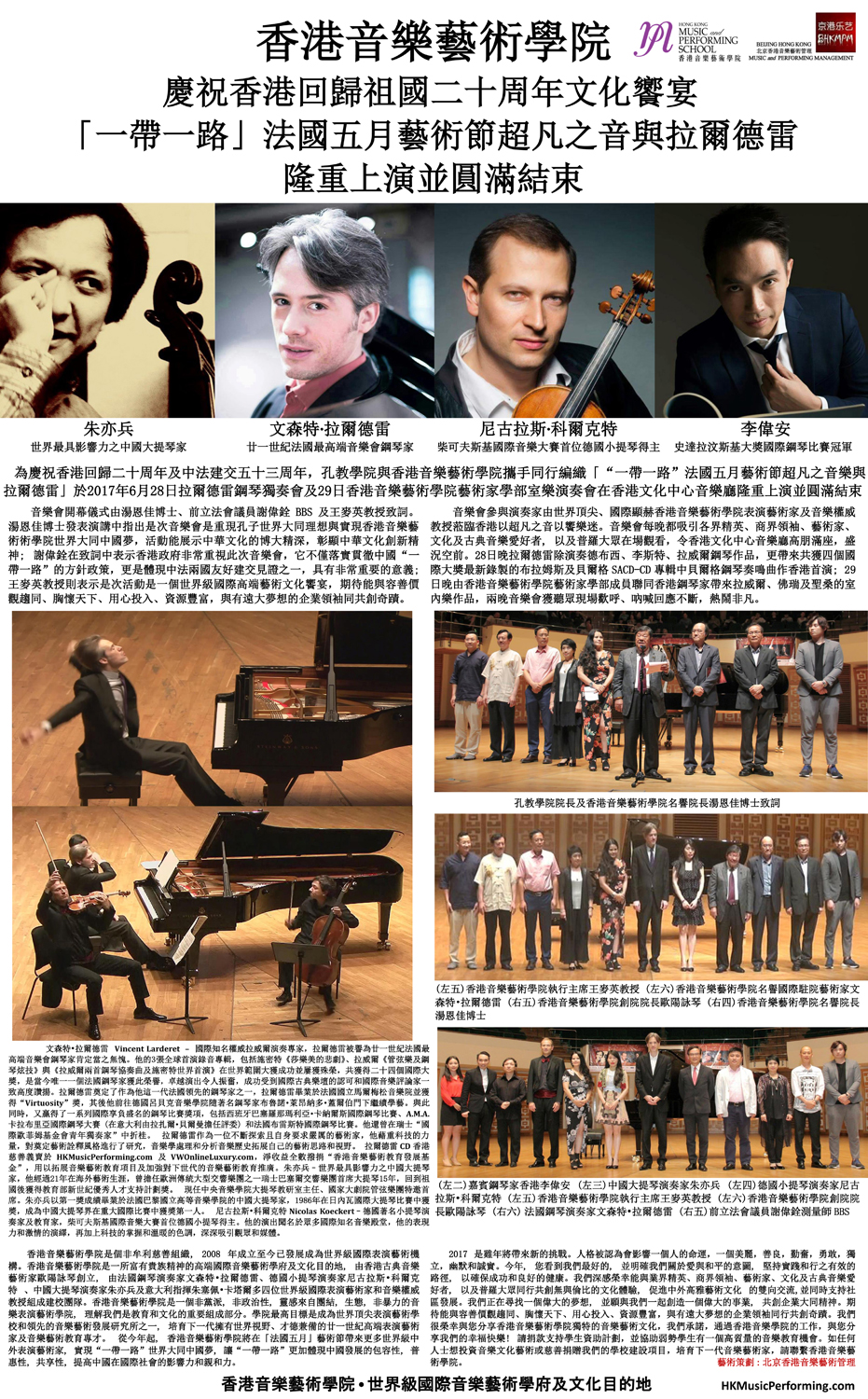 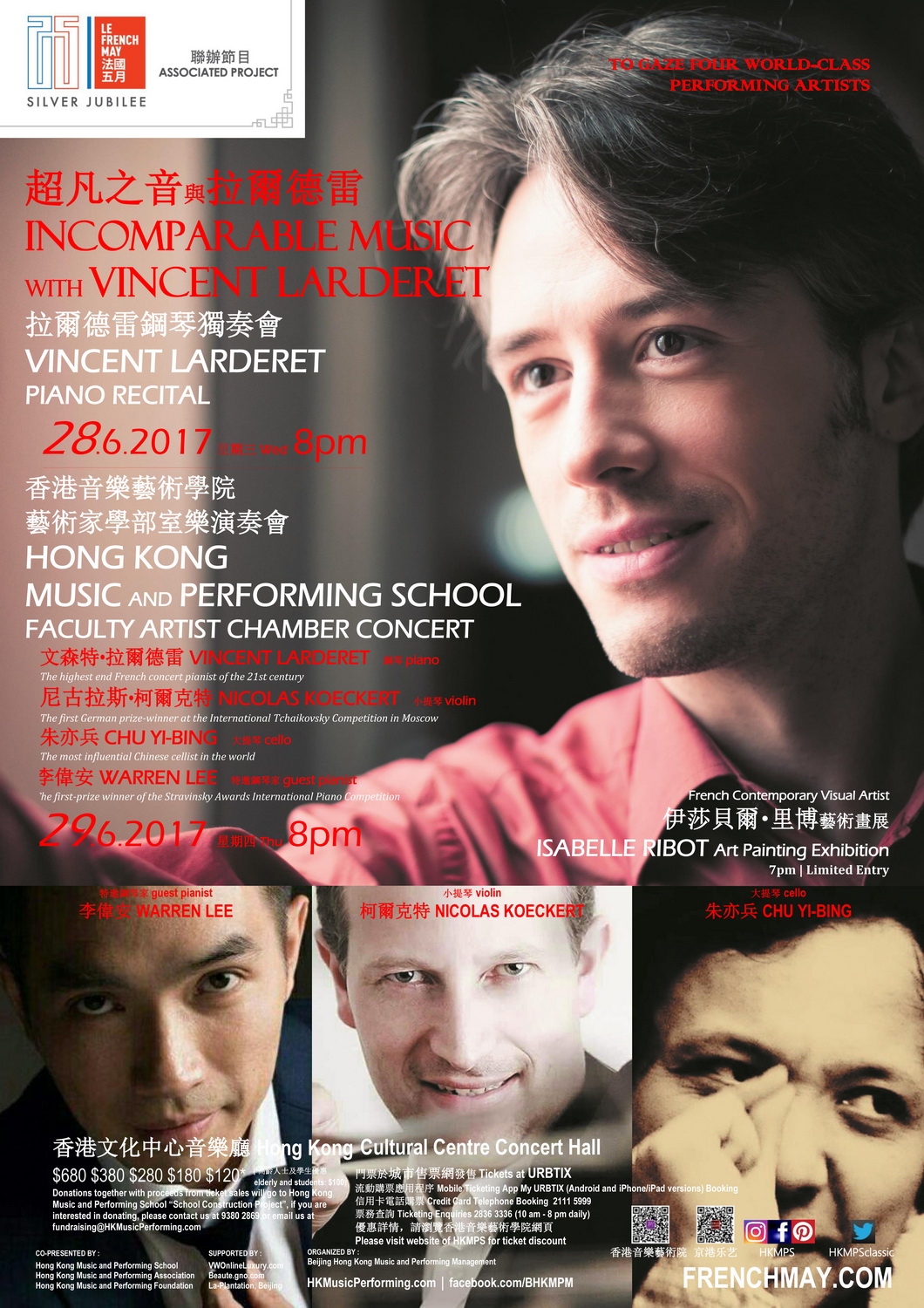 Vincent Larderet is worthy of the title of highest end French concert pianist of the 21st century. His 3 world premiere recordings of Schmitt’s La Tragédie de Salomé, Ravel’s Orchestral & Virtuoso Piano and Ravel’s Concertos & Schmitt J’entends dans le lointain… won a total of 24 worldwide awards. Larderet is the only living French pianist who received this honor and attracted international recognition for the exceptional intensity of his very personal and deeply inspired interpretations often compared to the piano legends such as Michelangeli, Arrau, Zimerman and Argerich. Praised as an “impressive pianist” (MusicWeb International, UK) for his “very lyrical playing” (Crescendo Magazine, Belgium) and his “multi-timbred” sound (Fanfare, USA), he “makes the piano equal to an orchestra” (Classica, France) with a wide range of “fascinating pianistic colors” (PIANO News, Germany). Internationally renowned as a Ravel specialist, he studied Ravel’s works on Perlemuter’s personal scores annotated after his collaboration with the composer. Graduated from Lübeck’s Musikhochschule in Germany with the legendary pianist Bruno-Leonardo Gelber, he is a winner of various international prizes such as Maria Canals in Barcelona, A.M.A. Calabria (in Italy under the jury of Lazar Berman) and Brest. Honored by the revered title of “Steinway Artist” and nominated for the “International Classical Music Awards” (ICMA), he is also “Classical Revelation” by Adami winner at MIDEM in Cannes and laureate of the “International Orpheum foundation for young Soloists” in Switzerland. Mr Larderet has performed worldwide in recital and concerto at prestigious venues. He is also the Artistic Director of the “Piano au Musée Würth” international festival in France. For his solo recital during “Le French May” associated project, Larderet will perform Debussy, Liszt, Ravel and Berg piano works including the first presentation in HK of his new Brahms – Berg ARS SACD-CD. In the chamber music concert, Larderet alongside with the first German prize-winner at the International Tchaikovsky Competition Nicolas Koeckert, the most influential Chinese cellist in the World Chu Yi-Bing and the first Prize Winner of the Stravinsky Awards International Piano Competition Hong Kong pianist Warren Lee, 4 distinguished world class performers brings “Le French May” audience an exquisite chamber music concert. The French contemporary artist about Isabelle Ribot’s Art painting exhibition and cocktail reception starting before the concerts. This world-class high end Art and cultural event is not to be missed! 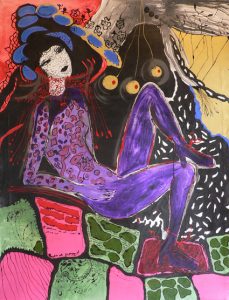 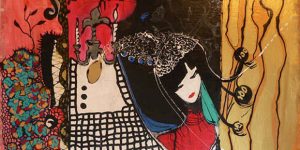 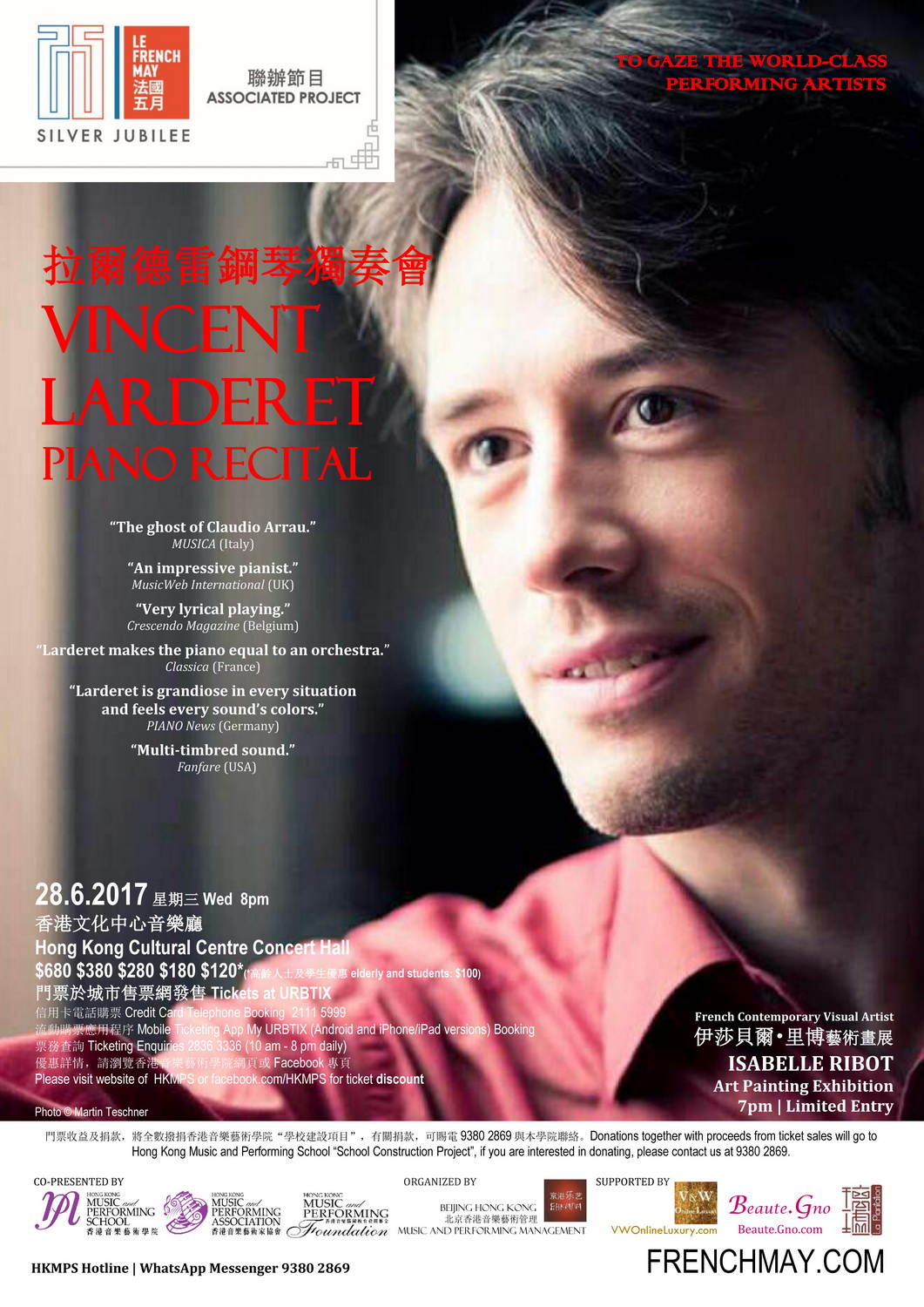 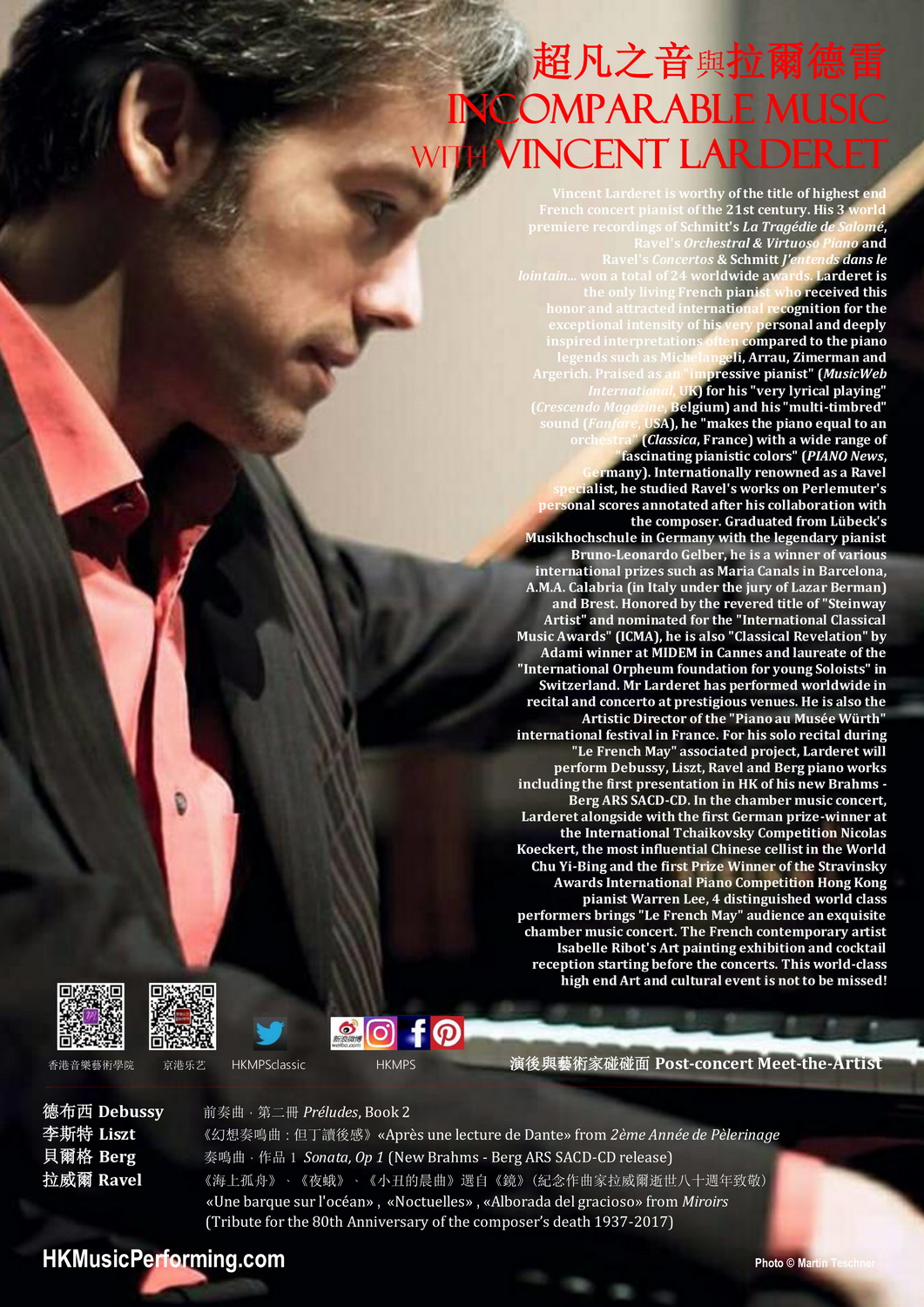 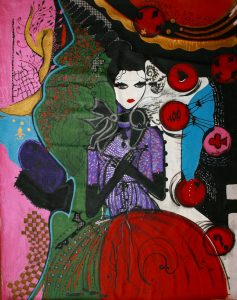 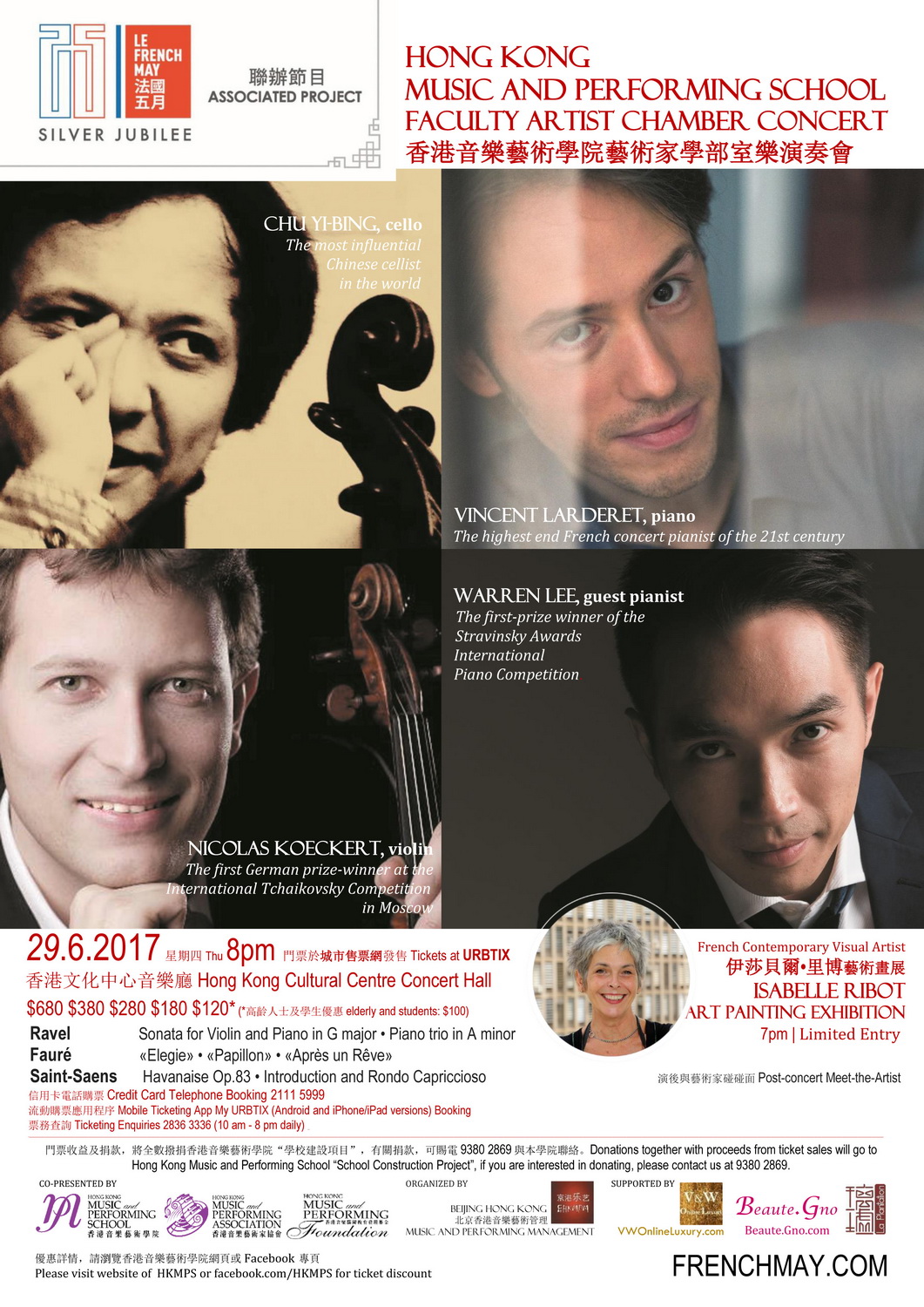 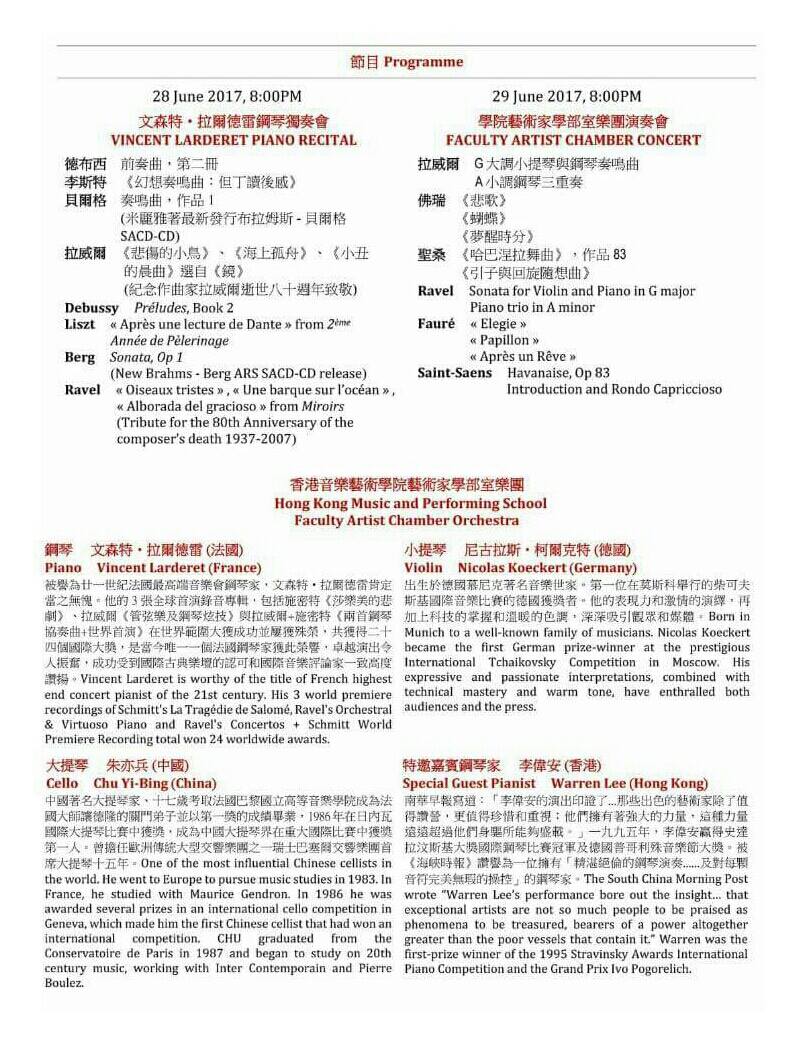 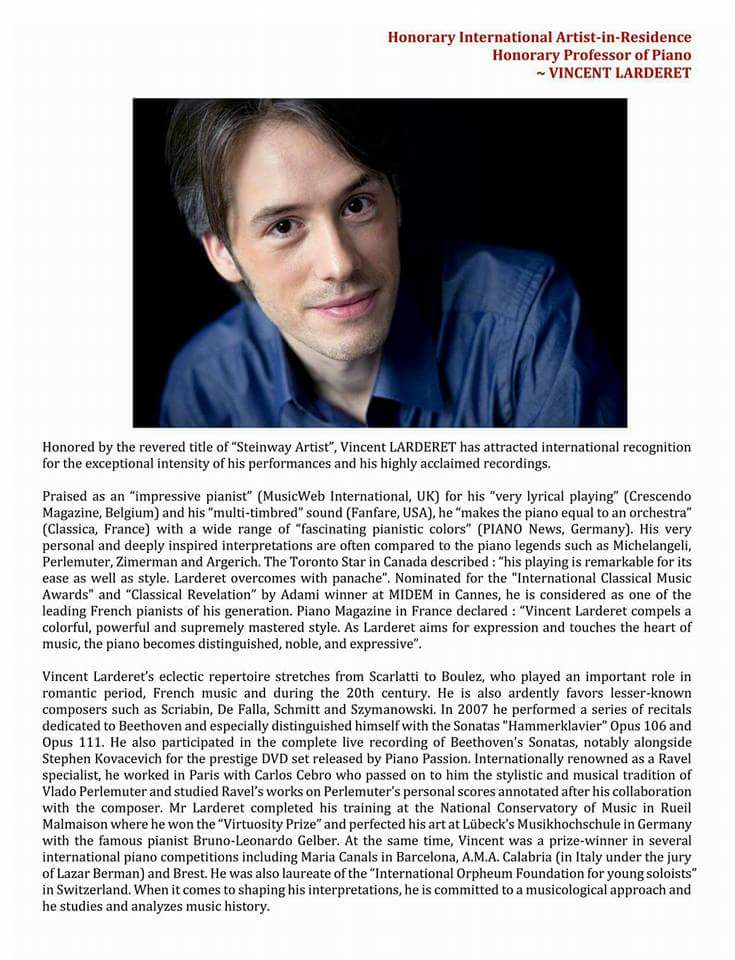 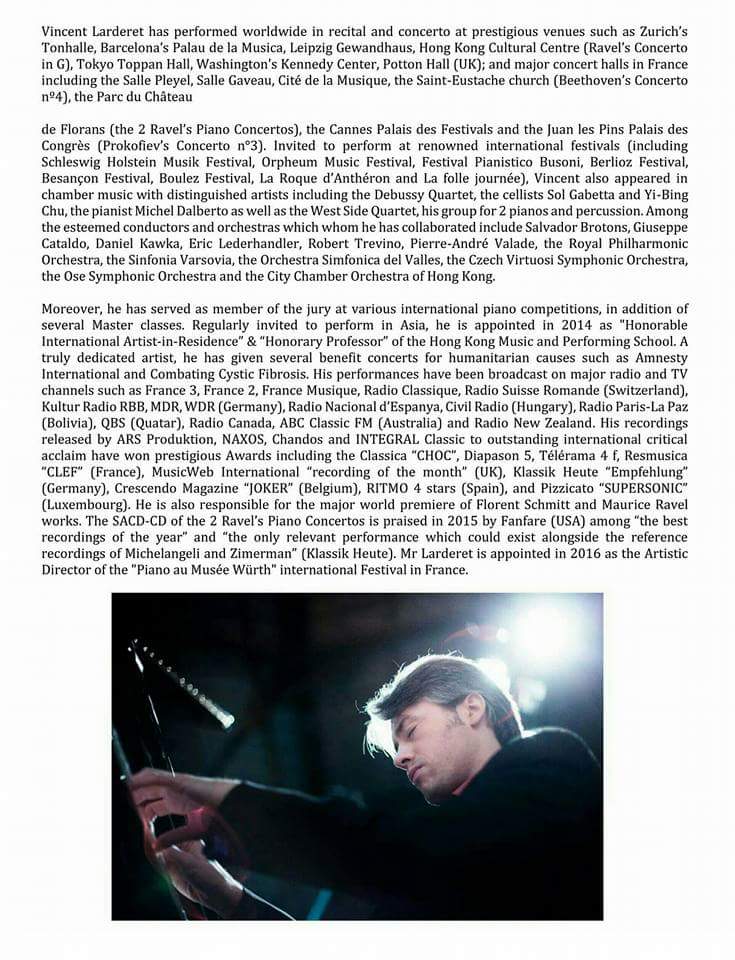 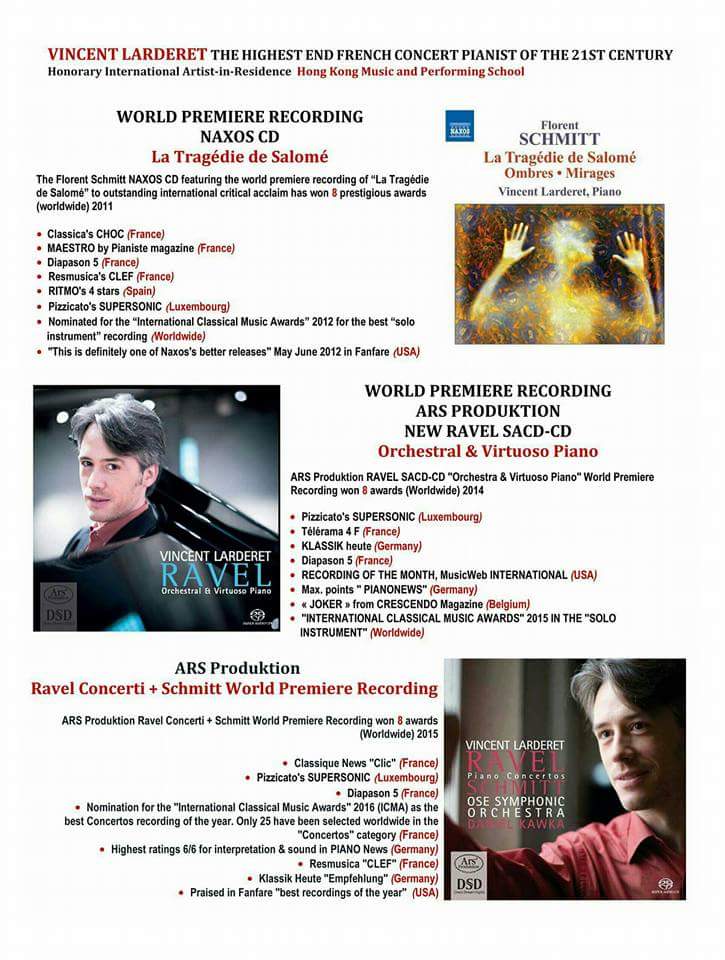 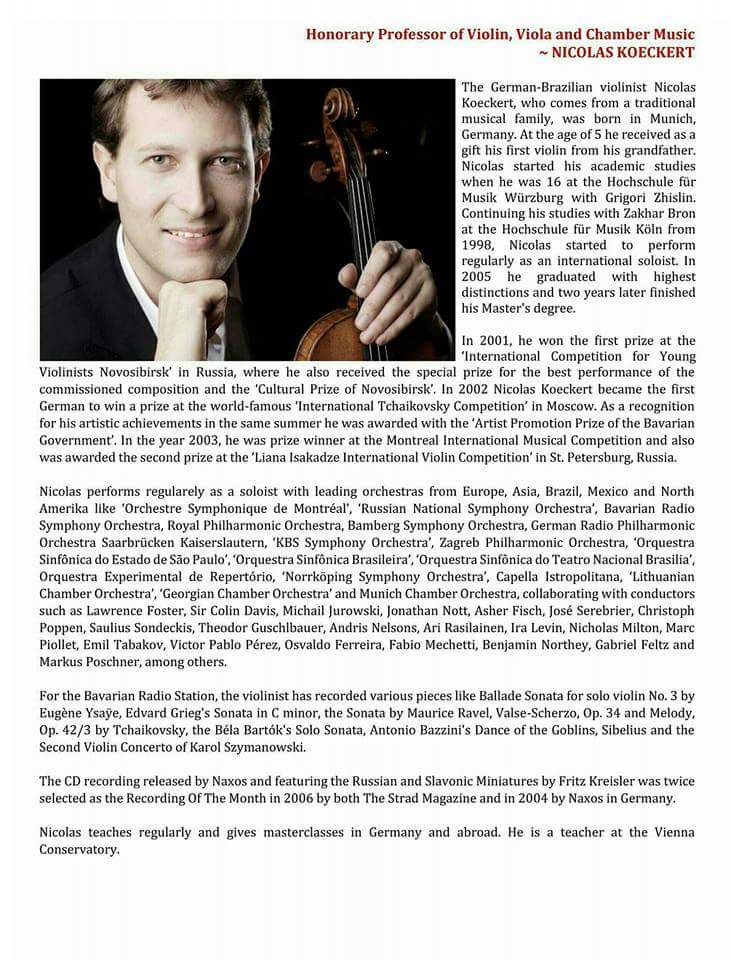 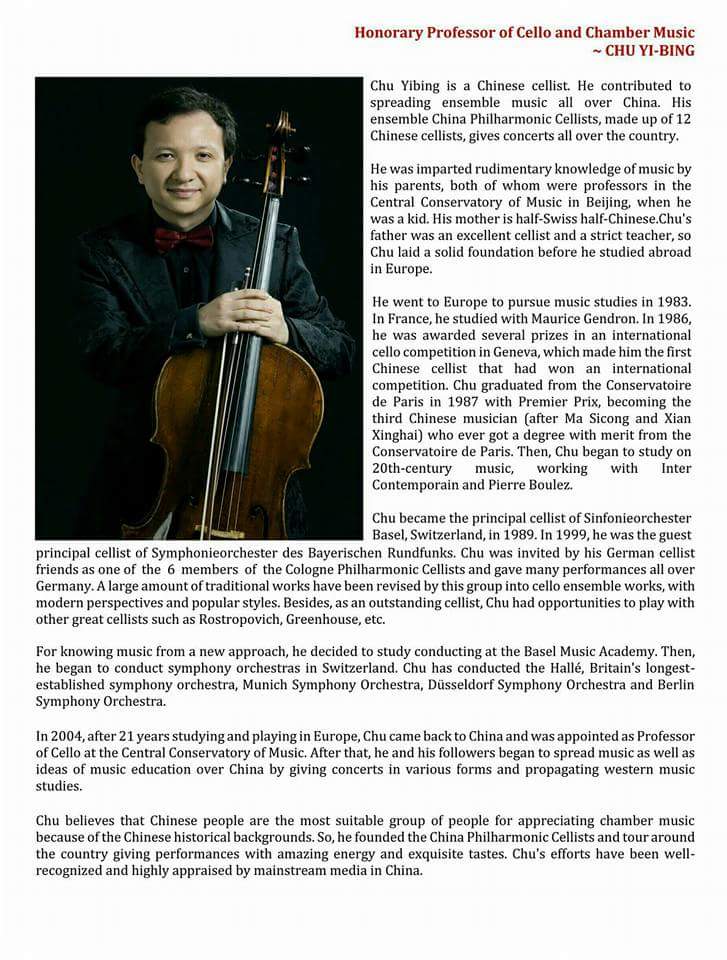 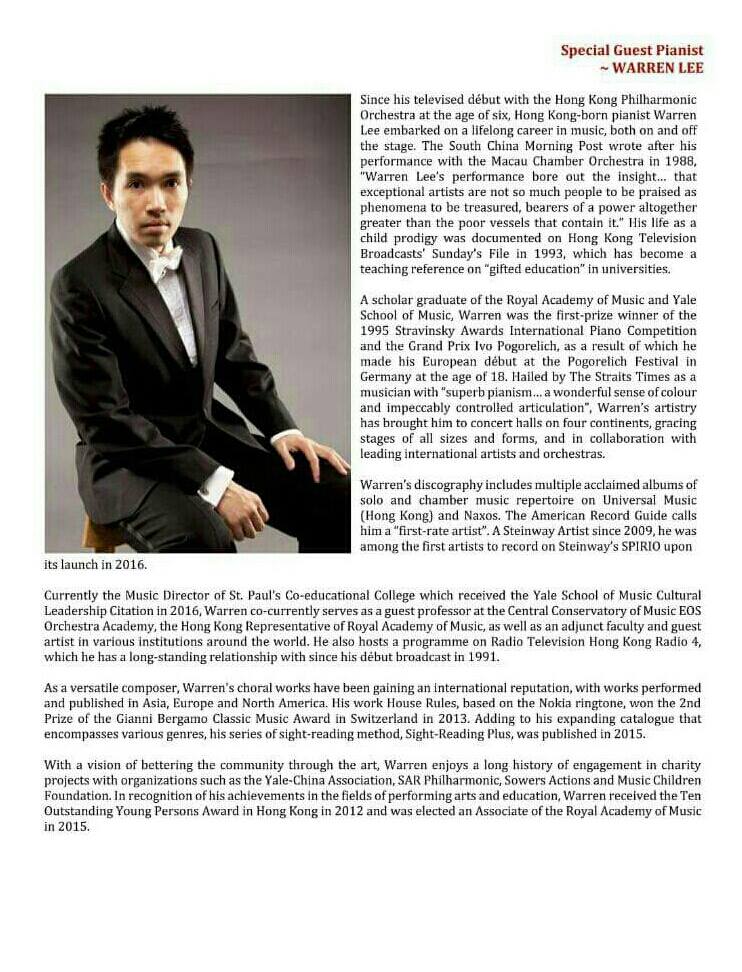 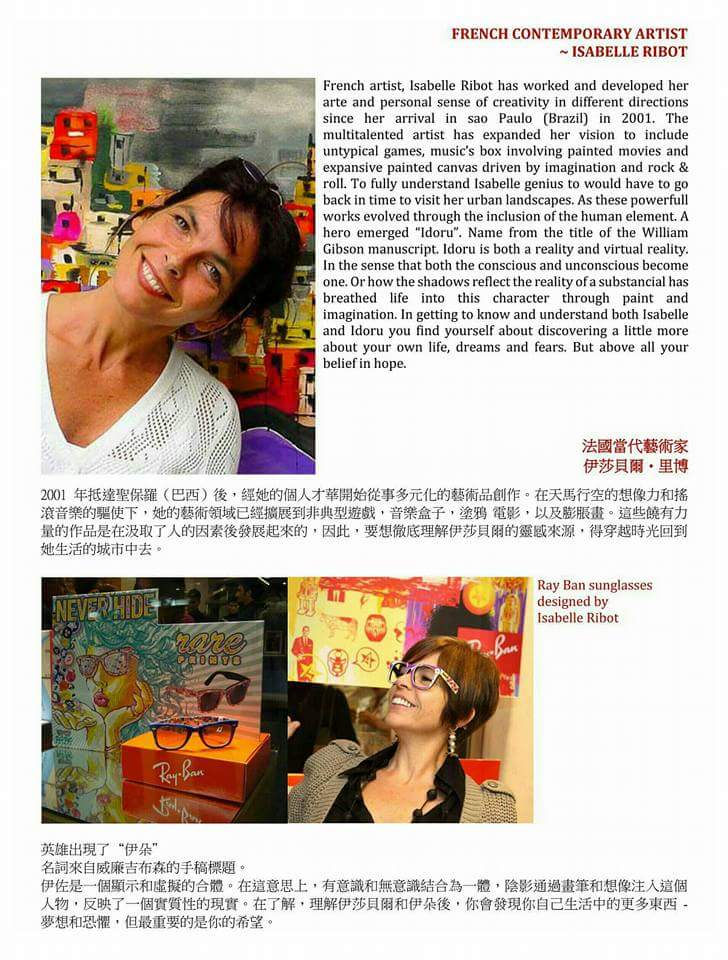